chapter 6 - how to become fearless 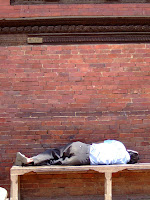 Everyone has fear, it doesn’t matter if they are different types of fear such as fear of pain, or responsibility, or relationships, or not being wanted, or fear of not being loved, of not having anything, fear of darkness, failure, loneliness, sickness, old age, death, or bad things that might happen to us.
Above all is the fear of the unknown.

If we have fear, we won’t have peace in our heart.

What is fear?
Generally it is just a feeling of insecurity that arises in our mind due to the imagination or thoughts in the mind projected into the future. We are actually afraid of something that has not yet happened. It is a bunch of fearful thoughts and imagination of ‘what if this happens?’ and ‘what if that happens?’

If someone goes into the jungle, he is afraid that he might see a tiger. Maybe he will, maybe he won’t. If he does see a big tiger in front of him, he will be afraid that the tiger might attack him, hurt him and kill him (imagination), but at this stage it hasn’t happened yet. Maybe the tiger will attack him, maybe not. And if the tiger really attacks him, at this stage, with his body full of adrenaline, he will forget his feeling of fear and try to save himself by running away or fighting the tiger. Maybe he will die of a heart attack caused by extreme fear even before the tiger actually attacks.

Fear exists for us to keep away from trouble and act as a life minder. Fear exists so that we will be cautious in our actions and speech. Fear is not a negative thing until it goes beyond an alarm to save our lives from a real dangerous situation. Fear consumes so much of our vital energy (Prana).

Fear of doing bad is not negative at all. Fear of telling lies and harming others is positive as well.

If we developed wisdom and courage, they will chase away the fear in us.

So, why not we relax our mind, free from fear and worries when there is nothing actually happening? Unless something is really happening now, then only we think of how we should deal with the situation with a calm and peaceful mind.