Chapter 24 - The power of thoughts 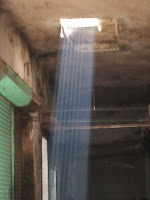 The perception of the world out there is indeed a reflection of what is inside us.

That’s why although everyone is living in the same dimension, but everyone has a different perception of their own world, and encounter different happenings in their lives. The positive mind perceives all kinds of experience positively and so thus the negative mind perceives everything negatively, while all and everything is just being what they are, neither positive nor negative.

From the surface, it looks like we are being conditioned by the law of nature, where everything is impermanently and selflessly changing restlessly. It is not wrong. But when we look deeper into ‘where does suffering come from’, we will find out that actually we are being conditioned by the ignorance in our own mind of how the mind ceaselessly reacts towards the mind perception of names and forms that gives rise to restlessness, disturbs and suffering.

If the mind can be free from being conditioned by the perception of duality deriving from ignorance in the mind, this mind will be free from ignorance and egoism that give rise to likes and dislikes, or the desires of craving and aversion, which give rise to all kinds of suffering, of restlessness, disturbs, dissatisfaction, disappointment, anger, hatred, hurts, offensiveness, defensiveness, violence, fear and worry within the modification of the mind reacting upon the absence of desirable objects and the presence of undesirable objects, as well as losing the desirable objects. The mind will be peaceful as it is being undetermined by all the pleasant and unpleasant or desirable and undesirable experiences. The world that seemed like imperfect will now being what it is, as it is, being impermanent and selfless, even though there might be many things are not necessarily being the way that the mind would like it to be. The world is neither something suffering nor not suffering.

Suffering exists when there is an idea of 'I' in the mind attaching towards the selfless mind perception of an impermanent worldly life existence, and identifying with the body and the modification of the mind as an individual being, and the state of the mind is constantly changing from good to bad, from bad to good, and this phenomena of impermanence ceaselessly happening with or without awareness of it. The mind is in a state of continuous restlessness. That restlessness is an inevitable suffering, if there's an idea of 'I' attaching towards and identifying with the restless states of mind. The mind is free from suffering, if it stands as a witness towards the restless states of mind without attachment or identification.

Such like headstand (Sirshasan) can help us to let go the fear in us and other negative thinking, and develop courage and go beyond what the mind thinks is possible and impossible.

Imagine when a group of people are having negative thoughts at the same time together and how powerful that can be, creating so much tension and fear in the atmosphere even though nobody is doing anything physically, but just by thinking of it mentally?

All the teachings from the saints and sages emphasized on the purification of the mind, which begins with developing positive thinking to counter negative thinking, stop doing bad and do more good, practice detachment and non-attachment, and being at the present moment, until the mind is free from being conditioned by the past memories and the future imaginations, and be free from being conditioned by the perception of duality, where everything is just what it is, neither positive nor negative.

It's pointless if we are trying to practice yoga to purify and quiet the mind, but at the same time we are full of passionate desires and worldly aspirations occupying and stimulating the mind ceaselessly. It's like a container that is not clean will contaminate any clean thing that we put in it.