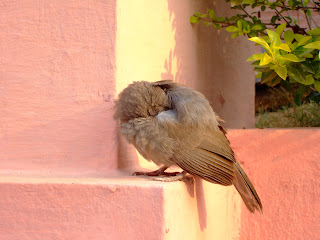 Thoughts are not always in our control. But we have the ability to think. We can train ourselves not to attach to the thoughts that crop up in the mind without our awareness and remain not affected by it. It is difficult to tell the mind not to have thoughts or only have the thoughts that we want. Like we can not change the content of the movie, but we can watch it and stay detached. Just like dreams and actions in the movies, they have no intention to affect anyone unless the audiences attached to the scenes and allow themselves to be affected by the scenes in dreams and movies. When things went wrong, they will say that it is the fault of the dreams and movies, but it is not at all. Blaming is one of the characteristics of the ego. It does not like to take responsibility for its own actions. It doesn’t like to be blamed also.

We really need to learn to take responsibility for ourselves, be responsible for our own actions and intentions that we had sent out to the surrounding, if we want to understand why we are unhappy in the past and in the present moment and to be able to know the Truth. With the functions of the intellect and the ego, together they generate likes and dislikes, good and evil, right and wrong, praise and censure, superiority and inferiority, happiness and suffering, craving and aversion in the mind. If a person is not awakened yet, he has no awareness about this happening between the mind, the intellect and the ego.

He is constantly being influenced and under the control of the mind and its functions.

He thought it was himself that doing all the thinking and react as he wish according to his likes and dislikes.

It is like when a person is dreaming, he has no awareness that it is just a dream, and he is the dreamer. The dreamer is identifying with the dream. He is caught up in all the happenings in life perceived by his six senses through the sense organs. He is also caught up in the past accumulated thought waves release from the subconscious mind.

His emotion is constantly changing in ups and downs. He is confused about what he really wants and not wants. He acts immediately according to every single feeling arises from his heart. He is living in doubts, fears, worries, dissatisfactions, stress, tensions, hopes and disappointments at all time. When a person is awakened and becoming purer in his thoughts, actions and speech, he can have self control in his dreams as well. As he attains self realization, he became the observer in his wakeful state, dream state and deep sleep state.