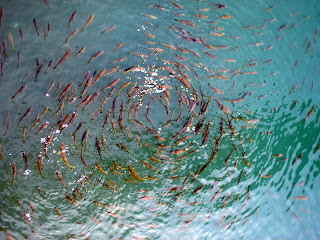 The world seems like having lots of problems now. But where do all these problems come from? No doubts that they are caused by ourselves, the human beings.
So what is the best solution to solve these problems?

Because no matter how much we try to send the message out there to everyone about the problems that we are facing now in the world and suggest many methods to help solve or ease the problems, but if people are selfish and ignorant without wisdom, then there won't be much changes going on because people just don't care and continue to create more problems while some other people are trying to clean up the mess that is already there.

This is because ignorance is so strongly rooted in many people. Selfishness and thoughtlessness are the products of ignorance.

In order to solve any problems efficiently, it is necessary to root out the cause of the problems.

The problems that we are having now in the world, are not really about people pollute the environment by using lots of plastic bags; or too many cars; or burning down the forest; or cutting down the trees; or pollution that come from factories; or people are harming other living beings by creating wars, riots, racism, hatred, religious differentiations and gangster fighting; or lots of crimes like robbery, rapes, assaults, and murders done by cold hearted human beings.

All these are the reflections or results or symptoms of ignorance.

No doubt that all these happenings are causing damages to the environment and causing painful suffering for many people in the world, but we need to know what is the root cause for all these happenings, then only we can really solve the problems directly and efficiently.

Actually all these actions are derived from ignorance in human beings. Ignorance is the root cause for all these meaningless stupid and evil actions done by many people who are responsible for all the consequences from their selfish actions but everyone claim that they did nothing wrong and they are not responsible for any damages.

To eradicate ignorance, there is only one thing - wisdom.

But how to attain wisdom?

Through dharma teachings and its practice in life.

Dharma is available and accessible for everyone who wish to attain wisdom and to eradicate ignorance from their mind, disregard what type of personality, race, creed, religion, profession, nationality, young or old, men or women, smart or less smart.

The gift of dharma is for all living beings. It is more important and efficient than just by trying to tell people what they should do and should not do. Because most of the people don't have the wisdom or conscience to understand how does one's actions can cause so much damage to the environment; and it is difficult for ignorant people to accept that their actions is contributing to the pollutions in the world; and it is not easy to advice them about taking care of the welfare of the environment and not to harm other being's live and feelings.

People who have very strong ego will not like to listen to other people telling them what they should do and should not do. They rather will do the opposite way of what have been told, to show their arrogance and stubbornness.

They will ignore what they were told about should do and should not do. They will remain selfish, thoughtless and ignorant. Maybe at the beginning, some people will try to co-operate and do something beneficial in a campaign. But after a while, the campaign will cool off and no one cares anymore.

It is like there are many cases of deadly road accidents caused by reckless and irresponsible drivers in everywhere in the world. All these people are not just risking their own lives but also risking other people's lives. Due to their selfishness and ignorance, they had caused so much painful sorrow to other people and their family and friends by causing injuries and deaths to those innocent people.

Some of these irresponsible people did know that their behaviors were selfish. But due to their anger and frustration towards other people and not happy with their own lives and angry with the world, they purposely wanted to be selfish and meant to drive recklessly and with the intention of causing damages and hurting other people too. And they didn't feel any regret or sorry about their actions at all.

Sometimes road accidents were not caused by the recklessness of the drivers, but because there were some mischievous or selfish people in the world who had intentionally or unintentionally create some obstructions such like double parking on the road side or put some foreign objects on the road that had caused accidents to happen. This was a very selfish act of irresponsibility and had caused painful suffering to some other innocent people.

Some selfish ignorant people also use the road as a place to commit suicide, which is very irresponsible as well because they are taking some other innocent lives with them or cause injuries and damages to other people just because they don't want to live anymore.

Most of the people did not know that their actions were so ignorant and selfish, and would cause damages to themselves and to other people too, because they are ignorant. Some people thought that they just want to have some fun and excitement to get rid of their boredom and to release their extra energy by driving fast and do some ''stunt moves'' with their cars.

There are many people who use hand phone while driving; or they are busy talking with the other passengers in the car; or their mind is busy thinking of some other things not concentrate in driving and not paying any attentions on the road; or merely some people just don't have the good skill on driving safely such like not knowing how to use the indicator or not obeying the traffic lights or signs; or people are just being impatient and wanted to drive fast. Driving fast is not necessary dangerous if the driver is well skilled and paying attention on his driving, while some people might be driving too slow and could cause some accidents to happen as well. But sometimes the machine is not in our control especially when the speed is too fast.

Some people will be feeling regret and guilty throughout their whole life if they survived the car crash due to their selfishness and ignorance, and had caused injuries or deaths to some other people.

It is not because people have never seen or came across with a ''safety driving'' campaign before.

All these ''safety driving'' campaigns and ''dangerous reckless driving will cause deaths'' campaigns were being held and advertised almost everywhere in the world, and in all the countries where they have roads and cars; to educate the people and to advise the people to drive safely and responsibly for their own lives and the lives of others.

But how come there are still so many serious road accidents happening everywhere and all the times?

What is the cause for all these suffering?

It is the ignorance and selfishness that is deep rooted in everyone's mind. People are not thoughtful for other people and are not aware of their actions could be so harmful and deadly. People are driving while they are arguing with family or friends; people drive after taking alcohol or drugs; people drive while talking or texting on the hand phone; people drive while listening to loud and exciting music; people are busy doing something else instead of paying attention on the road, and so on...

People are ignorant because they have not came across with dharma or they don't like the teachings of dharma even though they have heard about it. No one likes to listen to dharma talks unless they are interested in becoming a better person; or want to realize the Truth; or want to come out from miseries and be happy.


If we can plant the seed of dharma into people's heart, then slowly and eventually people will unleash the wisdom within themselves layer by layer; and slowly it will eradicate ignorance and selfishness from people's mind. People will start to realize what is going on; have awareness and will start to do something beneficial for themselves and other living beings for the welfare of the world. And this selfless action is done by people out of wisdom and understanding. People do it willingly out of awareness and not because they were told by other people to do so.

If every human being is wise, compassionate and selfless, there will be less unhappiness, anger, hatred, jealousy, lies, conflicts, depression, heart broken and heartache in our personal lives.

If everybody is wise, compassionate and selfless, this world is a heaven on earth.

Why do so many people turn to alcohol and drugs, committing crimes and hurting other people?

It is because they are angry, frustrated, discontent, not peaceful and very unhappy.

And why are they so unhappy?

It's because of ignorance without wisdom. Anger, hatred, jealousy, greed, lust and arrogance that create irritation; frustration; dissatisfaction; disappointment and unhappiness, are the impurities that sprung from ignorance. When a person is unhappy, he or she will cause unhappiness to other people around him or her; and then these people also become unhappy and will cause more unhappiness to some other people around them... At the end these unhappiness will eventually come back to him or her, who had caused this unhappiness at the beginning... It is never ending of unhappiness starting from one person and keep growing into a big wheel of unhappiness involving many other people; starting from one point of the wheel and it will come back to the same point again.

People are becoming more selfish because they are angry with other people's selfishness!

The more selfish a person becomes, the stronger the ignorance is within him or her.

What a big wheel of selfishness and ignorance growing bigger and bigger...

If every human being is observing right conducts; right understanding and right livelihood; and attain spiritual realization; everywhere will be filled with love and kindness; without lust and evil thoughts; without harms and painful sorrows; although we all still have to go through the natural process of old age, illness and death. But if we have wisdom, we will know that actually our true Self is never been born and never dies. It is not affected by old age, illness, pain or death to this physical body of us. We are the immortal Self, ever exist without a beginning and without an end.

By understanding this, we will have no fear and worries at all.

When a person has realized the Truth and is entirely detached from all the names and forms in this world, he or she is not affected by all the elements and dualities in this world. There is no more arguments or debates.

But if a person has not realized the Truth and is attached to the names and forms either strongly or just a little, then he or she is still bound by the duality in this world. He or she is affected by all the elements and dualities in this world.

We need to contemplate on the dharma that we have heard; analyze it; practice it and realize the Truth by ourselves, then we will truly understand and know what was our ancient dharma teachers trying to tell us and teach us actually.

May we all develop wisdom and join together to make the world a better place for all beings to live in.